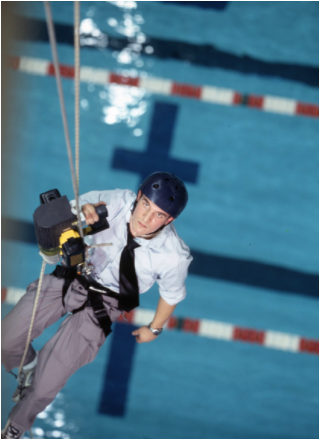 Nate Ball is a TV star, book author, business owner, beat boxer, engineer, and musician. Nate is also an inventor. He and some friends in college invented the ATLAS powered rope ascender. It’s a portable device. It can be moved around to where it is needed. It helps people or cargo go up a rope quickly. It is powered by a battery. This is very helpful for rescue workers and soldiers because it helps them save people who are in difficult places quickly. “How quickly?” you ask. Nate’s ATLAS powered rope ascender can raise more than 250 pounds 10 feet in one second. Here’s a picture of Nate using his ATLAS powered rope ascender above MIT’s pool!

How did Nate become an inventor?

Nate was curious. He experimented and built a lot of things. He liked to dig when he was a small boy growing up in Oregon. He especially liked to dig in his family garden. He would build, wreck, then rebuild mud dams and underground forts. When Nate was in fourth grade, he created a bottle-rocket launcher that shot plastic bottles 100 feet into the sky. When Nate got to sixth grade, he made a hovercraft. He repurposed a vacuum cleaner’s motor to make his hovercraft hover. Inventors often use their imaginations and repurpose things—use them in different ways and for a new purpose.

Inventors repurpose things to make new things! Sometimes they turn what they see in nature into new things. Sometimes, something will inspire an inventor. Then they will use their imagination to make something brand new. Here are some examples:

Let’s practice thinking like Nate and other inventors. How could you repurpose things in your recycling bin?

Back to Nate’s Story

When Nate was an eighth grader, he saw a Tesla coil on the internet shooting lightning and he thought it was the coolest thing he’d ever seen. He tried building one in his parent’s garage. He made capacitors, devices that store electrical energy, out of glass bottles and aluminum foil. Nate repurposed those glass bottles and foil to make the capacitors.

Nate took normal everyday household items and recycled materials to create his ideas when he was young. He made a practice of repurposing things to make his creations. He repurposed plastic soda bottles to be the rockets for his rocket launcher. He repurposed the vacuum motor to be part of his hovercraft. He repurposed glass bottles and aluminum foil to be capacitors.

You can repurpose at your home, too. Cardboard and plastic are great materials for repurposing. Take a moment to imagine something that you could now build with some of the materials. You may need to add fastening material to your cardboard and plastic. Masking tape is better to fasten with than duct tape because it is recyclable. You could also use a stapler or a hole punch and cotton yarn.

Write about your idea that you can make out of repurposed materials. Can you draw it?

Nate got to use very nice tools when he got to college. He never had access to these tools before. Nate liked using the tools. He was also grateful that he had so many years without them because without them, he was forced to think creatively to build his ideas. The skills he developed as a child thinking creatively continued to help him as an adult.

Thinking creatively helped Nate become an inventor! Nate received the Lemelson-MIT Student Prize for his invention, the ATLAS powered rope ascender. Check out the video on how he invented the ascender.

Do you know Nate? Maybe you have seen him before since he is the television host of Design Squad on PBS. He’s grown up now. He cares a whole lot about helping kids learn to invent, even now as a business owner. Check out Design Squad Global and practice inventing. Watch Nate build a bicycle balance and learn some new science. Nate also lights up balloons for party decorations. Design Squad Global repurposes materials a lot. You can find many materials right in your own home. Check out the Global Challenge on Super Shoes. What will you invent?

Literacy Extension for Children in Grades K–2: Not a Box by Antoinette Portis

Literacy Extension for Children in Grades 3–5: What Do You Do With an Idea by Kobi Yamada

Math and Literacy Extension for Children in Grades K–2:

CLICK® magazine’s “Meet Inventor Nate Ball,” an interview by Click the Mouse. This article can be read aloud with the child as Click and a caring adult as Nate. The last statement Nate makes is about measuring how tall Click is so Nate can design a “back scratcher that also holds a radio, plate of cheese, and a Click magazine.” The design challenge can be downloaded or printed.

Math Extension for Children in Grades 3–5:

If Nate’s ATLAS powered rope ascender can go up 10 feet per second while lifting 250 pounds, it can go up…

Do you see a pattern?

How many feet can it lift in 5 seconds? You can fill in these spaces.

Do you think that Nate’s ATLAS powered rope ascender can ascend 6,000 feet up the Grand Canyon? Why or Why not?