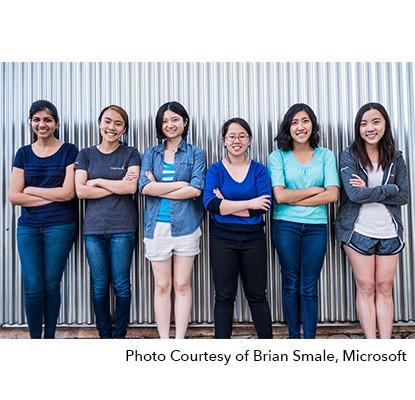 Chen, Chandani, Grace, Jessica, Charlene, and Tania are friends. They are also inventors. They created Tactile. Tactile is a device. It changes text to the braille alphabet.

“Huh?” you may be thinking. What does tactile mean? What’s a device? Have you heard of braille but you don’t know anything about it?

Let’s learn together. Let’s think like inventors! Let’s learn three new words: tactile, device, and braille. Our first new word is tactile. Tactile means that you can feel something with your finger. Our second new word is device. A device is something that is made for a special purpose. Our third new word is braille. Braille is a way of writing with raised dots. It helps people who are blind or visually impaired to read with their fingers. Braille is a tactile alphabet. Why do you think our six friends named their invention “Tactile”?

With Tactile, a person who is blind can put the device over a newspaper, menu, or page in a book. It will instantly pop up the braille letters. The letters are raised dots for the person to “read” by touching the dots with their fingertips. The person may not be able to read a book with their eyes, but they can read it in braille using Tactile.

One day, the six friends went to an event at MIT called a hack-a-thon. They wanted to work together to solve a problem. These friends wanted to make the world a better place. They thought about problems people face. They thought about how hard it is for blind people to read things in places where there isn’t any braille. Places like restaurants have printed information but they usually don’t have braille menus. At the hack-a-thon, the friends decided to help people who are blind to “read” menus.

These friends made a good team. They had different skills. They combined their skills to invent a solution. Chandani knew about some difficulties blind people face from her volunteer work. The team did research on how many people have difficulty seeing. They learned that millions of people in the United States do not see well. The team wanted people who do not see well to be able to read printed words. These friends had engineering skills. They knew about materials they could make things out of. Inventing a solution was a lot of work! They didn’t make their device in one day. They built. They tested their device. It didn’t work. They fixed it. The inventors rebuilt and tested their device again. They worked together for a long time before their device worked the way they wanted it to. They named their new invention “Tactile.”

How Did These Friends Become Inventors?

The six women came from different places. They became friends in college at MIT. MIT stands for the Massachusetts Institute of Technology. Five of the friends came from United States. Grace and Tania both came from New Jersey. Chen came from New Mexico. Jessica came from New Hampshire, and Charlene from Florida. Chandani traveled the farthest to come to MIT. She came
from India. Together, this group of friends decided to put together the power of their thinking and their skills to help improve the world for the people around them. Inventors come from everywhere. Can you put marks on the world map where the inventors came from?

Activity 1: Where are the Tactile inventors from?

Each of the women contributed to the team. They worked at different companies all over the world. They did research in laboratories. They volunteered to help their communities. Three of the friends volunteered together to help orphans and their adopting families. The friends also learned how to be engineers. Chen studied materials science and engineering. Chandani and Tania studied electrical engineering and computer science. Grace, Jessica, and Charlene studied mechanical engineering.

This is a prototype of Tactile. It is a portable text scanner. It has a pin display that can move up and down to form braille letters. Tactile uses Bluetooth technology and a smartphone for data processing. The invention has won many awards, including the Lemelson-MIT Student Prize for the “Use it!” Undergraduate Team category. Watch this video about Tactile.

The team of inventors designed their first device, called a prototype. They tested the prototype. They kept working on it and iterating their design. They improved it. They made changes. They made more prototypes. Their invention was useful and unique. The team applied for a U.S. patent. The patent is pending. This means that the patent hasn’t been granted yet. It is still being reviewed by the U.S. Patent and Trademark Office. The office makes sure that the idea is useful and unique.

The six friends became inventors together, and they want to keep working together to help solve problems in other areas. As a group of women inventors, they want to encourage everyone—especially girls—to consider careers in STEM fields and become inventors and problem solvers, too!

Louis Braille invented the coding system for the alphabet when he was a teenager in 1824. Louis had been blind since he was a little boy. Louis started with a code that already existed. In the early 1800s, there was a coding system that included dashes and dots that people in the military could use to “read” by touch in the dark. Louis thought the military system was too complicated. He invented a new code to represent the alphabet. He used only six dots and no dashes. The dots could be arranged in six-dot cells that are two dots by three dots. Think of a LEGO® brick with 2 studs X 3 studs. LEGO has actually designed special bricks to help people with visual impairments to learn braille. Look at the technical drawing on the patent application. Can you see the six-dot cells?

Here is a website about braille with games to play. This website has features to be fully accessible to people who are blind or visually impaired.
https://braillebug.org/Games.asp

Activity 4: Create Your Name with the Braille Code

We encourage you to post your invention ideas and solutions to the “Share Your Invention” Forum. We’d love to see what you’re working on!